A Response To: “You Only Have A Place In The World To Entertain People”

Don’t you love it when the average person tells you your passion is worthless?

Take a look at that. Drink it all in. Feels great, don’t it?

This comment, responding to the cast of Hamilton making a statement on stage to VP-elect Mike Pence, has caused a bit of a stir online, but the thing is, it’s not original. This guy just repackaged a Facebook post that has made the rounds in the last few months.

Let me show you: go to Facebook’s search bar, right now, and type in “organ grinder”. Funny, right? After you search that, hit the “Latest” tab. You’ll see a lot of reposts, dozens and dozens, of something like this: 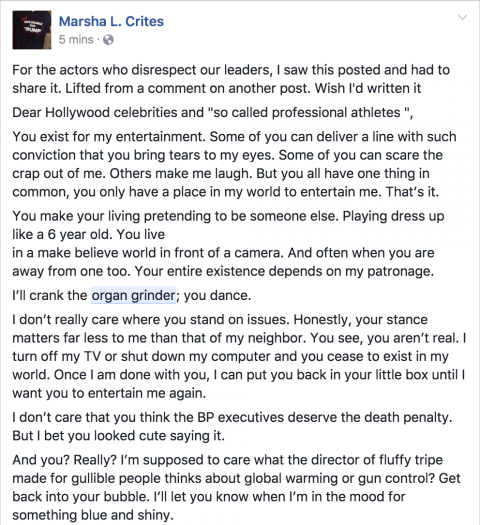 Somehow, this “organ-grinder” and “dance, monkey!” motif has really made the rounds–you can go down and see hundreds of posts that look like this, almost verbatim.

So yeah, I’m pissed off. But let’s take a step back for a second before I open my pie hole.

Look, a dose of empathy first and foremost: remember that many of the people that repost something like this do not have a dehumanizing view of those in the performing arts. Rather, they’re pushing back at a perceived sense of elitism by millionaires. Like, I get that. Nobody likes the feeling of being told what to think or what to do.

Now, I’m pretty sure the same people sharing this Facebook post (and the video above) would have shared the hell out of a video made by actors if Hollywood was more conservative. If Hillary had won the election, and the all-white cast of Friends made a video asking Hillary to “govern for them, too,” it would have been cheered by these same people.

So most of it I just kind of let pass as typical conservative-speak. If we can shit all over Scott Baio, you guys can have at least a little fun. But this sentiment in particular really bothered me:

“Your entire existence depends on patronage of paying customers… I turn off my TV or shut down my computer and you cease to exist in my world. Once I am done with you, I can put you back in your little box until I want you to entertain me again… In my world, you only exist for my entertainment. So shut your pie hole and dance, monkey!”

First of all, what the F–everyone’s existence depends on patronage of paying customers. Paying customers have to call the plumber and order Burger King, too. And yes, without people that want art, it wouldn’t exist either.

But seriously? We “only” exist for your entertainment? Can you imagine if Leonardo DeCaprio said that farmers in Indiana only exist for his kale salads?

We all depend on each other. It’s called a society.

The implicit message is not just that actors’ political messages shouldn’t matter, but that any profession on the basis of entertainment–art, music, even sports–is an inherently lesser profession. I’m a classical musician. I’ve heard this kind of talk my whole life, so I took this exceptionally personally.

So I’d like to make an equally personal plea on behalf of “the entertainment industry.”

On its surface, the idea of entertainment being subordinate is a message I can kind of empathize with: we do occupy a space in the human experience not essential to living or to stability, unlike the farmer or the plumber. We don’t fix cars or build buildings. We don’t have a “9:00 to 5:00” job like everyone else.

That’s all true. But that doesn’t make what we do superfluous.

Our job is to make your life post-5:00 PM…worth living. Let’s put aside the evidence that cultural events in cities also boosts the economy and talk about what it is that we do.

Professional athletes give humanity a means of escapism: freedom from our world of politics and taxes by escaping into the Cowboys’ 9-1 record and Kevin Durant’s rebound/assist totals. Musicians give you the other side of the coin–a vehicle for introspection and a way to experience your own inner world more deeply and more profoundly. Actors vacillate between both worlds. Those people “playing dress up like 6 year olds” whisk us away to a galaxy far, far away one moment, and bring us back to a love that got away from us the next.

Without people like us–people that “make you laugh” and “sometimes bring tears to your eyes”–your life and everyone else’s would consist of WORK and NOT WORK. Art is everything. Your iPhone is the product of a calligraphy class. Your local Starbucks’ playlist is literally the product of hundreds of artists working together in a studio for months and months.

Netflix and Chill isn’t possible without us, for god’s sake.

So, in closing, when people in this position choose to make a statement by taking a knee for the national anthem to protest police brutality, or by making a plea on stage to “work for all Americans”, I urge you to consider that they–we–are not being dogmatic in our world views. We’re not saying that we’re famous and successful, so believe what I believe, because I’m famous.

It’s from a place of humility, not strength:

“I may be a performer on stage, on the radio, or on camera. But in real life, I’m a human, just like you. And this is what I have to say.” Thanks for reading. I’m John, a classically trained clarinetist who writes about important shit that most-of-the-time relates to music. If you’d like to send some extra love my way, use a click or two to buy me a beer HERE. It takes a lot of money to keep the website running and I appreciate it more than you know. If that doesn’t jive with you, please share this on Facebook–it also helps a ton. If you’d like to reach me personally, contact me through this form, or leave a comment below.