The past few weeks, I’ve been mostly bedwetting about the election and constantly refreshing FiveThirtyEight (The Donald is at a 33% chance of winning as of 11/3), when I noticed a gem on my Facebook feed:

Whoa. A stunning event, to say the least… and definitely unprecedented.

…Joking aside, it was a remarkable moment. The Westboro F—ing Baptist Church, arguably the most infamous hate group in America,[ref]If you’re not familiar, I find Wikipedia’s summary satisfactory: Westboro Baptist Church (WBC) is a Baptist church which is known for its hate speech, especially against LGBT people (homophobia), Catholics (anti-Catholicism), Orthodox Christians (anti-Orthodoxy), Muslims (Islamophobia), Jews (anti-Judaism/religious antisemitism), American soldiers and politicians. The church is widely known as a hate group…The church also has made statements such as, “thank God for dead soldiers,” “God blew up the troops,” “thank God for 9/11,” and “God hates America.”[/ref] was coming to my alma mater to protest our “vanity.” These are people that attended the Newtown funerals of 20 elementary-school children and picketed them singing “praise to God for the glory of his work in executing his judgment”, according to WBC’s now suspended Twitter account.

So you know, real uplifting folk.

Apparently, “If you had taught [Juilliard students] to invest 5% of the energy they use for the vanity called ‘The Arts’, America would not be leading the world in racing to destruction.”

…I’m not really sure what this sentence means. But I admit it’s kind of flattering to be characterized as the sole demographic tipping the balance between global salvation and global destruction. Also, we’re leading the world in the race to destruction? Ugh, American exceptionalism, am I right?[ref]Even better, we’re just one of their two stops in NY (The WBC is protest-touring nationally, or something). The second is a condemnation protest of outside the offices of 6-second looping video service Vine…which Westboro Baptist Church somehow simultaneously touts their use of. Bizarre logic, to say the least.[/ref]

I had tremendous interest in being at the protest, but not just for the sheer novelty. I also had an immense curiosity as to how the student body would handle WBC. For all of Juilliard’s quirks, I remember an impressively robust atmosphere of social inclusion and tolerance, reflected within the attitudes of both faculty as well as the student body… but I also remember a lot of impassioned and opinionated folk. Would there be aggression? There were a few semi-underground Facebook groups organizing musical demonstrations, but would they fall through?

Would Westboro Baptist Church even show up? 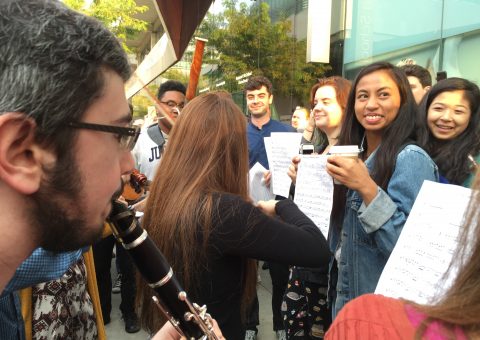 Clarinetist Philip Solomon laying down all sorts of shit with other Juilliard students: Hava Nagila, Amazing Grace, you name it.

At first, the morning had all the makings of a giant disappointment. Only three WBC protestors even came, they were 6 minutes late, and they spent the first few minutes on their phones texting. Staff members, no doubt concerned for the well being of the students, stood both inside and out with grim faces. I was denied my first attempt to interview the protestors without a “press pass”, and police were there to shepherd everyone around without incident. The protestors and counter-protestors were stationed quite a ways apart, so that direct confrontation was unrealistic.

But the protest quickly became a tremendous spectacle. Drivers regularly craned their necks out of their windows on 65th street, where the protest was held. Since Juilliard is situated near LaGuardia High School, the teenage students passing by, proud to be classic New Yorkers, directly heckled them in front of their faces, having to be pulled away by officers in some instances. Dozens of high schoolers and Juilliard students alike stopped in front to take selfies, which the protestors gleefully posed for, fanning out their signs for maximum exposure. 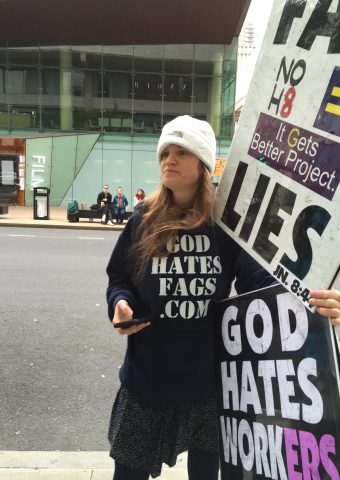 Despite warnings from friends that they would throw bloody tampons at me if I went too close, I spoke to two of the protestors. Here’s what one had to say:

John: I’d like to ask you why you’re protesting today.

WBC Protestor: This Juilliard School is the heart and soul of the so called “arts community.” It’s from here that launches forth the imagination and thoughts and intents and the hearts of doomed America. And they have taught this nation proud sin. The ranks of this school and the arts community are filled with proud Sodomites and otherwise proud sinners. So it all launches [from here].

John: So you feel like this is the best place to protest the arts?

WBC Protestor: For this minute, this is the best place for us to be period. But yes, this is a good place to protest the arts. Because all these young people that come out of this school, will go on to do what they’re taught by those that have established the policies of proud sin and disobedience against the proud standards and commandments of God.

Real wisdom. The other protestor, a younger girl seemingly in her mid twenties, had a more interesting take:

John: Why are you protesting today?

WBC Protestor: This place is the center of vanity. They have corrupted art and made it all about themselves. These kids come here and they do not make music for Christ the lord.

John: So is music and art a part of your life at all?

WBC Protestor: Oh sure. Music can definitely be a part of life as long as it is in worship of our Lord and Savior Jesus Christ. My little brother is learning Bach on the piano at home. But this place is not that at all. It is a perversion.

I was incredibly struck by how polite these two ladies were to my innocuous questioning. They apologized for interrupting or talking over me multiple times, even when they didn’t have to. I understood part of it was knowing they need a good relationship with press in order for them to “get their message out”, but they did not sound robotic, only misguided… passionately so. I didn’t hate them so much as marvel at their commitment to such a nonsensical way of life. 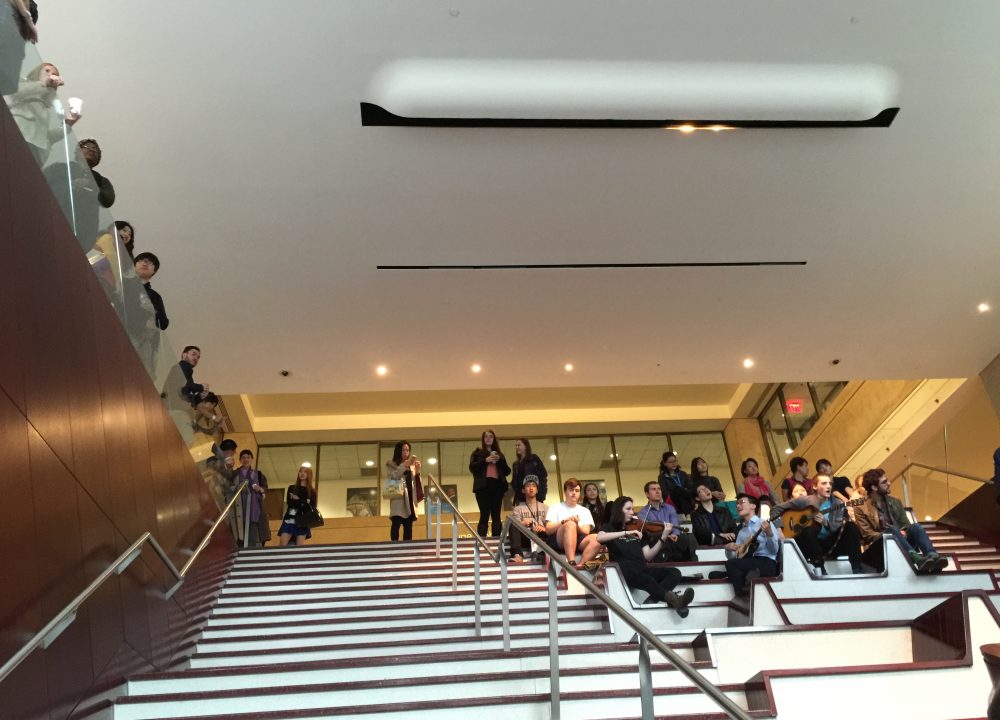 Students gathered on the front steps of Juilliard, making music and repenting

As a kid, you ever try to scare one of your friends out of the blue… but you mess up something or come out at the wrong time, and they just look at you and laugh, with a mixture of confusion, bemusement, and a little pity?

To the students I spoke to, WBC was that kid.

The Juilliard students counter-protesting seemed…amused, as if a magician was doing a street show on the sidewalk. Juilliard third-year violist Andrea Fortier brushed off the event altogether. “I knew that everyone was going to laugh at it and get angry together. I didn’t feel upset at all.” Composer Zach Green felt similarly: “It’s easy to forget that what these people are doing is actually offensive because it’s just so bizarre. It’s hard to not laugh at it, so I have to keep reminding myself that it actually is a serious thing that people are very hurt by.”

Despite repeated concerns from administration and faculty of emotional damage the protestors could cause–one student told me her professor mentioned to “go in the back entrance if you are easily offended”–the students seemed to treat the protest as a bonding experience. 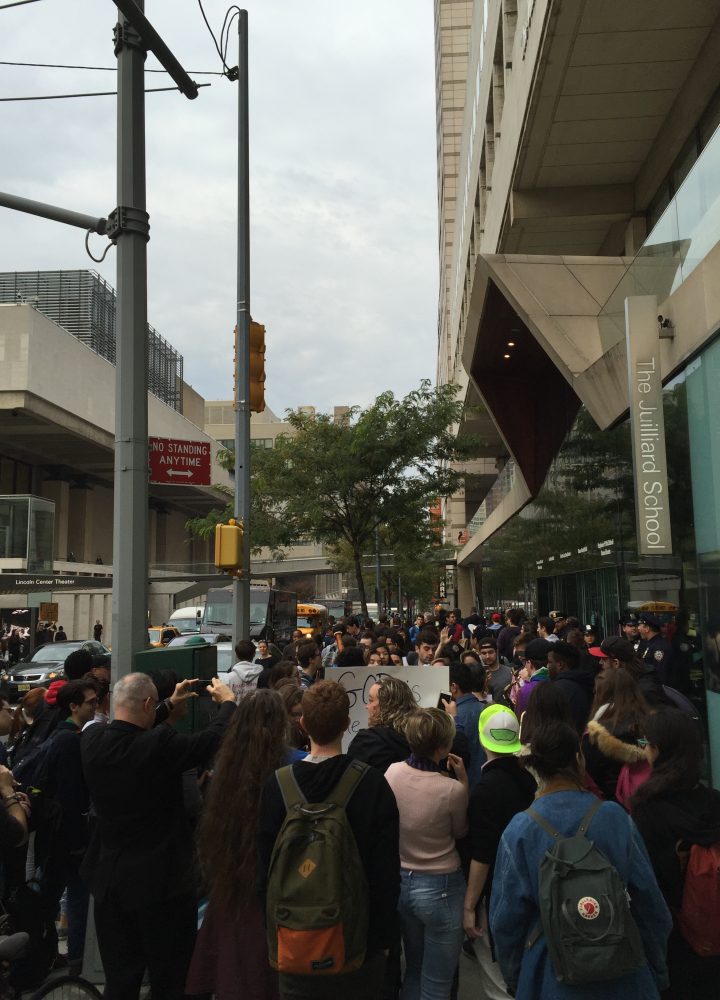 Taken from behind the counter protestors.

Third-year bassoonist Joey Lavarias spoke in between punctuated laughter: “Everyone’s been making music, having fun. There are a bunch of really cool signs… like the one behind you that says ‘Hell Must Be Fabulous.’ I love it so much.”

Ms. Fortier was almost glad for their appearance: “If they’re going to go somewhere to hold up their sign, they might as well do it here, because then we can give them a concert or something.”

One Juilliard second year master’s composer, Will Healy, did just that. Here’s his spur of the moment plea at approximately 9 PM last night on Facebook:

Yes, despite less than 12 hours of turnaround, it actually happened:

The video and stories covering it have since been shared dozens of times.

“This is what Juilliard is supposed to do.”

Not all students focused on antagonizing the Church. As the group of Juilliard counter protestors performed the Star-Spangled Banner, Mr. Green opined that the students coming together was sending an incredibly positive message:

I’m glad the students decided not to follow the recommendation of the school, which was to ignore [the protest] entirely…On the one hand [counter-protesting] attracts attention to them, but at the same time, I think it’s just a great opportunity to unite as a community. Too often, I feel like the art sits outside of politics… as if we’re trying to not weigh in on anything. So in a way, I think our counter protest proves that the arts can make a poignant, relevant statement that we can stand for a Greater America. This is what Juilliard is supposed to do–be a symbol of our artistic culture. In a way, I feel like to do nothing… would be the wrong response, because it forgoes an opportunity. (Star Spangled Banner)

Indeed, what an opportunity seized by the student body. In a building where people can unload their stress and negative emotions on one another, it was refreshing to see student and alumni alike bond almost instantaneously, both on social media and at the protest.

But perhaps the most memorable exchange of the early morning was with Morgan, a horn student I met from MSM. Mid-interview, the crowd starts cheering wildly at something on the other side of the street. I asked her:

“What are you seeing over there?”

“A sign that says fuck off. And I wholeheartedly agree.” 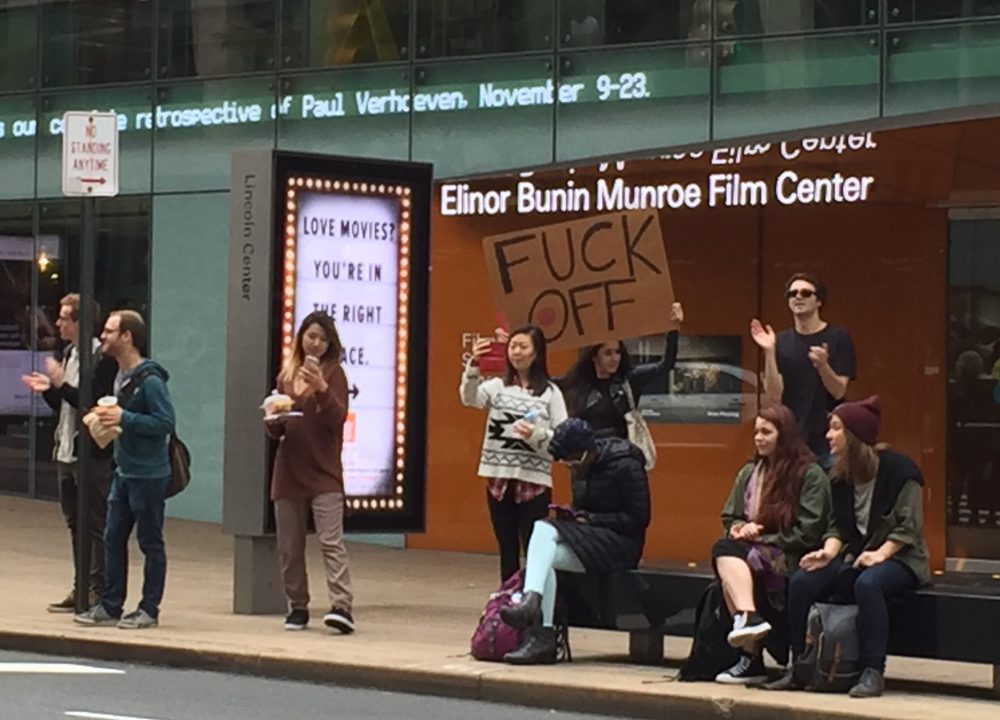 Some “don’t get sued” legal words – Please note that the opinions of those interviewed are self-representative only. Quotes are lightly edited and are in no way necessarily associated with or demonstrate views of the Westboro Baptist Church, The Juilliard School, The Manhattan School of Music, or any other institution.

Thanks for reading. I’m John, and I write about important shit that most-of-the-time relates to music. If you’d like to send some extra love my way, use a click or two to buy me a coffee or a beer HERE. It takes a lot of money to keep the website running and I appreciate it more than you know. I also accept love via words! Contact me through this form, or leave a comment below.